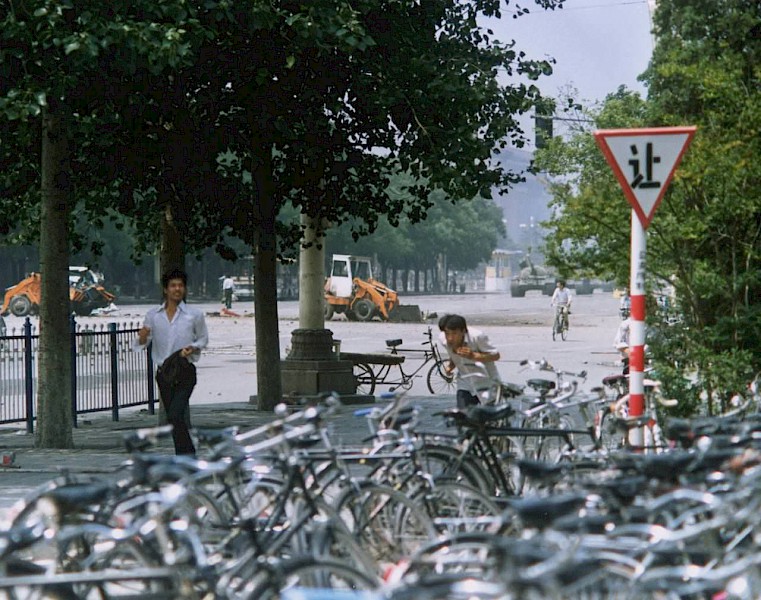 A New Angle on History: Terril Jones worked as a reporter in Beijing during the Tiananmen Square protests of 1989, he shot many photographs and recorded several hours of video. It wasn’t until weeks afterwards, when he had returned to Japan, that he discovered the magnitude of what he had captured — an iconic moment in history from an entirely unique angle.
.
For 20 years the negatives rested in Jones’ belongings, following him across the world throughout his career as a journalist. He contacted The New York Times after reading the accounts of the other four photographers in Wednesday’s Lens blog.
.
Jones’s angle on the historic encounter with the tank man is vastly different from four other versions shot that day, taken at eye level moments before the tanks stopped at the feet of the lone protester.
.
The photograph encourages the viewer to reevaluate the famous encounter. Unlike the other four versions, we are given a sense of what it was like on the ground as the tanks heaved forward, the man’s act of defiance escalated by the flight of others.
.
“I was extremely high strung by June 5 when I took this photo. I had been running on little sleep since students began a hunger strike in Tiananmen Square on May 13, and I had been trading shifts with other A.P. reporters, staffing the square 24/7 for nearly three weeks. Adrenaline and the drive to stay close to the action took me back to the street on June 5 [and not June 5 as popular world history claims, red. FvdS]. I was in front of the Beijing Hotel and I could hear tanks revving up and making their way toward us from Tiananmen. I went closer to the street and looked down Changan Avenue over several rows of parked bicycles when another volley of shots rang out from where the tanks were, and people began ducking, shrieking, stumbling and running toward me. I lifted my camera and squeezed off a single shot before retreating back behind more trees and bushes where hundreds of onlookers were cowering. I didn’t know quite what I had taken other than tanks coming toward me, soldiers on them shooting in my direction, and people fleeing." .”
0