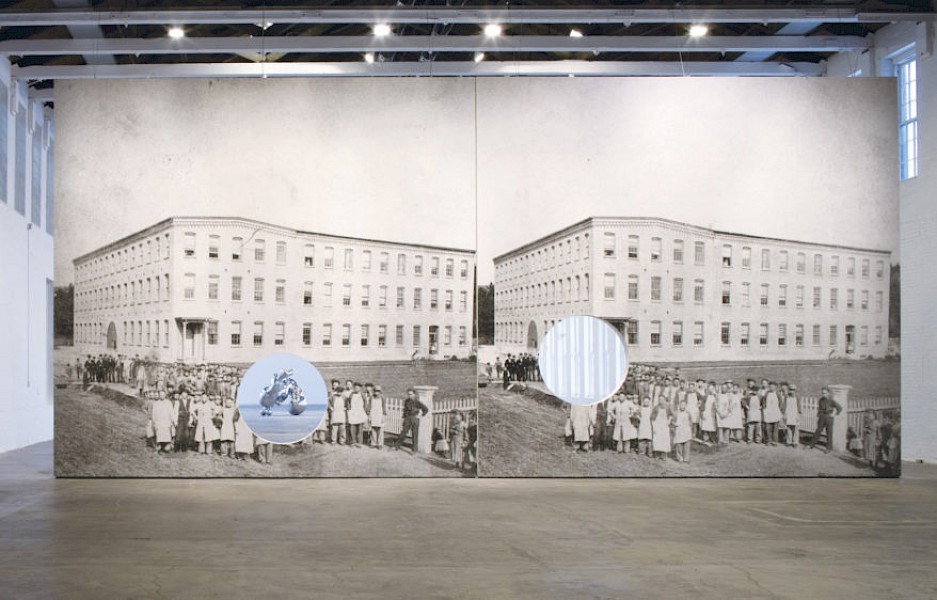 Photography figures prominently in Simon Starling’s work and was the starting point for the main work in the exhibition, titled The Nanjing Particles. The installation began with two very small albumen prints — each measuring roughly 3×3 inches. This pair of stereographic photographs depicts a group of Chinese laborers in work clothes posed in front of the Sampson Shoe Company. The Chinese men were brought to North Adams in 1870 to break a strike, and they stayed in the city for roughly ten years. While the nearly identical photographs were originally meant to be viewed using a stereoscope a fleshed-out image of the Chinese immigrants’ presence in North Adams remains elusive.
.
For The Nanjing Particles Starling literally and metaphorically mined the history captured in the two photographs from 1875. Interested in the photographs as a receptacle for meaning as well as in their physical existence as repositories for metal grains used in forming the images, the artist extracted silver particles from the prints’ emulsion in order to present their three-dimensional, sculptural characteristics. Working with scientists, Starling created 3-D images of two particular silver particles with the aid of a one million volt electron microscope which magnified the particles 25,000 times. Starling translated scanned images of the particles into computer renderings from which three-dimensional models were produced. These models of the tiny image fragments were then replicated as immensely enlarged sculptural objects, scaled up one million times their original size. At this point the story came full circle: economic imperatives took Starling to present-day China where the enlarged particles were fabricated into sculptures, forged in stainless steel and polished to a seductive, reflective sheen. By juxtaposing historical material with contemporary modes of production and market conditions, Starling’s project drew attention to economies of labor both past and present.
0