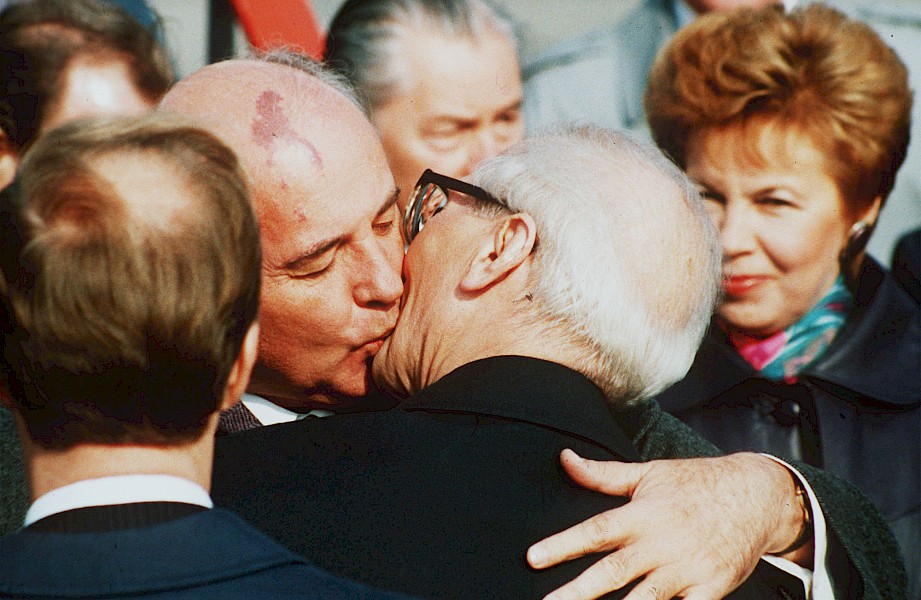 In our perception, a historic event not only has an explanation and a cause, but also a reason and a purpose. This line of reasoning answers completely to the deterministic model; the idea of cause and effect forever being inextricably bound up with each other. This believe in causality and irreversibility is inherent to our thinking, looking and acting. It is the ways in which we tend to simplify the multitude of events, before we are able to consume them in the form of succinct headlines. A schematic representation enables us to interprete events. And it subsequently gets, in a neutralized format, a place in the canon of our historical consciousness. But is the image thus created in line with reality? Thinking of the fall of the Berlin Wall, the photos that were taken in the evening hours of 9 November 1989 immediately come to mind. Masses of excited people climbing the wall. Hands in the air to help each other upwards. Some people are armed with a pickax, to crush holes in the wall. Each of these iconic photos is touching, because they form the symbol of a nonviolent revolution, the reunion of a people, and the end of the repressive GDR. This image, however, does not fully correspond with the true course of history. What marks the true key moment related to the fall of the GDR and its then leader Erich Honecker? In unraveling this history, one arrives at an alternative reading of the received view. People could climb the Berlin Wall, because Soviet leader Mikhail Gorbachev had decided to DENY the GDR any use of military force to crush the rebellion. No images exist of that historic ACT of NON-INTERVENTION. But there is an alternative: one month prior to the definitive fall of the Wall, Gorbachev kissed Honecker (at the mouth as communist leaders had a habit of doing) during the large-scale celebrations marking the 40th anniversary of the GDR, perhaps already knowing that Honeckers days were counted. But even when this is not the case, in retrospect the kiss throws a revealing light on the course of this loaded history.
3