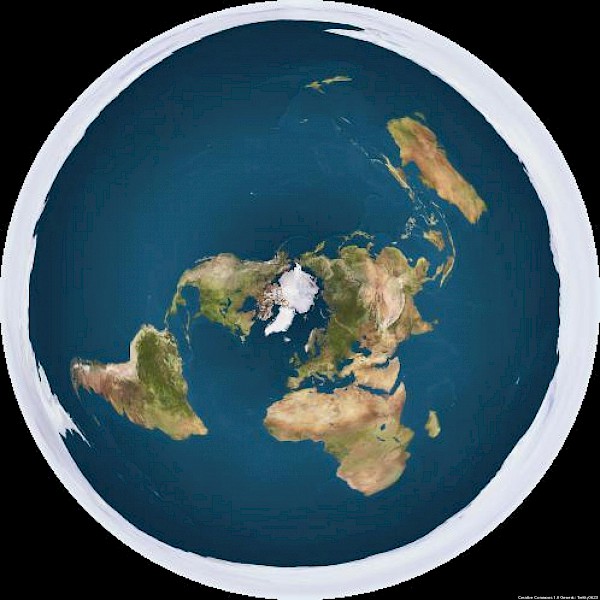 One of the most famous advocates for the theory of the flat earth flat is the Dutchman Klaas Dijkstra (1895-1969). He published the book ’Plea for the Flat Earth’ and challenged scientists to argue with him.
.
Space photos wouldn’t prove anything. People do not see with, but in the eye, as if we are in a camera. His theory follows from a mode of thought called the "Zetetic Method," an alternative to the scientific method in which sensory observations reign supreme.
.
Nowadays, members of the Flat Earth Society claim to believe the Earth is flat. Walking around on the planet's surface, it looks and feels flat, so they deem all evidence to the contrary, such as satellite photos of Earth as a sphere, to be fabrications of a "round Earth conspiracy" orchestrated by NASA and other government agencies.
.
The belief that the Earth is flat has been described as the ultimate conspiracy theory. While writing off buckets of concrete evidence that Earth is spherical, they readily accept a list of propositions that some would call far-fetched. Flat-earthers believe photos of the globe are photoshopped; GPS devices are rigged to make airplane pilots think they are flying in straight lines around a sphere when they are actually flying in circles above a disc.
.
The leading flat-earther theory holds that Earth is a disc with the Arctic Circle in the center and Antarctica, a 150-foot-tall wall of ice, around the rim. NASA employees, they say, guard this ice wall to prevent people from climbing over and falling off the disc. Earth's day and night cycle is explained by positing that the sun and moon are spheres measuring 32 miles that move in circles 3,000 miles above the plane of the Earth. These celestial spheres illuminate different portions of the planet in a 24-hour cycle. Flat-earthers believe there must also be an invisible "antimoon" that obscures the moon during lunar eclipses. As for what lies underneath the disc of Earth most flat-earthers believe it is composed of “rocks."
.
Curious what the Flat Earth Society would think of the ‘Jefferson Grid’ (see: Grid Corrections by Gerco de Ruijter).
0