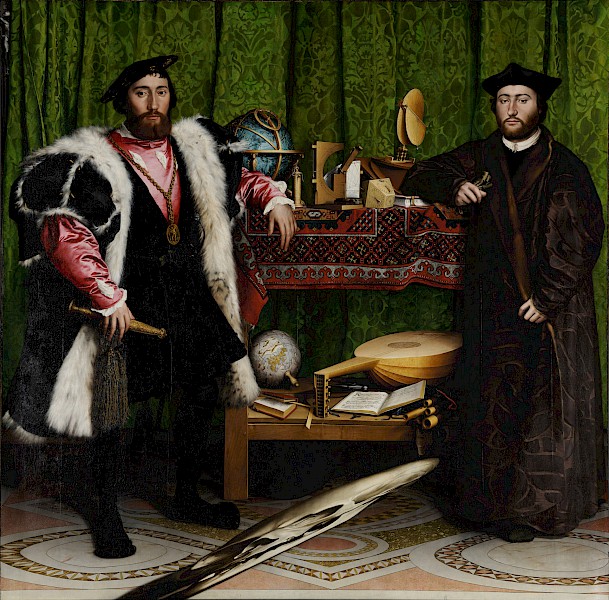 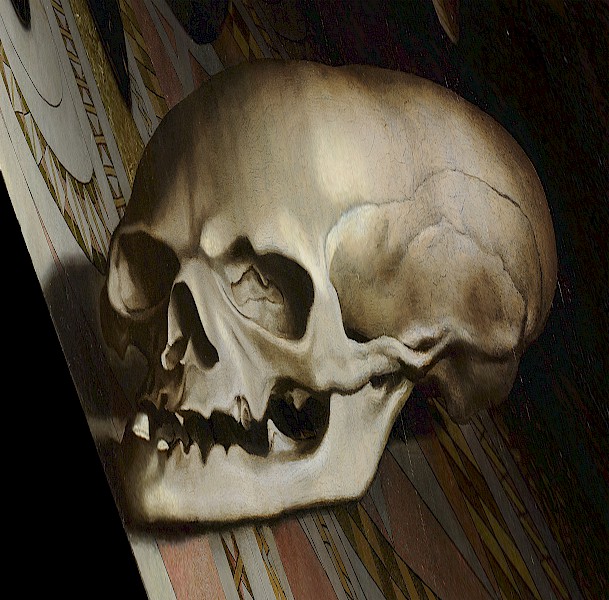 The anamorphic skull in Hans Holbein the Younger’s The Ambassadors (1533), is mindblowing, but the overall meaning of the painting goes far beyond this ‘gimmick’ in terms of the remarkable globalising forces at work in that age - towards a 'a new world order'.
.
The double portrait depicts Jean de Dinteville on the left, a French ambassador sent by the French king, Francis I to the English court of Henry VIII. On the right is Georges de Selve, the bishop of Lavaur, France.
.
The painting is functioning basically as a grid. On the left: the active, wealthy and succesful life. On the right: the contemplative, more modest life. At the top: the celestial sphere, with objects that are related to the study of astronomy, and to the measuring of time. On the lower shelf, the terrestrial sphere, with a globe, a lute, a book about arithmetic and a book of hymns. They stand on an elaborate abstract pavement, which was meant to represent the cosmic order.
.
The painting is filled with carefully rendered details, in a clear style typical of the naturalism of the 16th century Renaissance. The broken string of the foreshortened lute is thought to reference the discord that resulted from the Protestant Reformation. Martin Luther, who initiated the Reformation, composed the hymns shown.
.
The globe’s inclusion of the red lines reveals the importance of the competition between colonial powers for land, resources, and people, and the far-reaching implications that European maritime voyages and colonial expeditions would have across the globe.
.
The book in front of the globe also alludes to the importance of trade. The navigational instruments on the upper shelf also point to commercial activities that sponsored travel and exchange, but also imperialist expansion and colonization.
.
Holbein is about representing what these men had achieved in life and what mankind had achieved historically. But the anamorphic image of a skull is serving as a memento mori. And in the extreme upper left corner there is a little sculpture of a crucifixion. These elements point to the limits of earthly life, the limits of earthly vision, of man's knowledge, the inevitability of death and the promise of Christ's sacrifice on the cross.
0